Bingo Hall has a long and successful history with online bingo players. The site has been in operation for over seven years now. Bingo Hall is a winner to many players due to the hourly large prize bingo games it offers routinely each week. The even larger monthly games are another reason to give this site some play. The Bingo Hall review are checkered between good and bad. Some players are less than happy with the withdrawal rules. It is always a good idea to read these rules before making a deposit to any site. 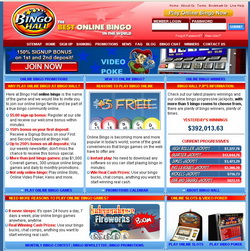 The bigger jackpots start with the hourly coverall game with a prize of $1000. Other types of games offer big jackpots too, so a player has many opportunities to win a significant jackpot. A player can buy the cards for these big jackpot games early so as to insure that they do not miss the games they wish to play. The cards once purchased are automatically played in the game they are for so a player need not even be online when the game is being played. The price per card to play a game depends on the game and can cost one dollar to one dime per card.

The bonuses for deposits start with the first one and continue on other deposits that are made over time. The first deposit is matched at a rate of dollar for dollar. Further deposits have their own posted matching rate on the site.

In order to be a player in full standing the player must make a deposit to an account that they have registered with the site. This is done very easily by using a credit card like Visa or MasterCard or by wire transfer. Withdrawals can be executed the same way in some instants or by whatever means the site has available. Any bonus money must have been cleared according to the play through rules that are posted on the site. A player would be wise to read these rules on any site they play on so as to not be a party to a misunderstanding.

Customer support is available 24/7 by Live Chat or email. A player can also go into a chat room and get answers to basic questions. The Chat rooms are usually very friendly to new players with questions.

Loyalty points can be earned by referring other players to the site and by being an active player. The points for activity are based on the play and the money spent on cards and games. A player can think of loyalty points as a reward for playing on the site. The points can be used to buy cards, play in special games and purchase prizes.

Bingo Hall has been around for a long time in the bingo world, so they have been tried and tested by the players in the bingo world. It is difficult to keep all players happy all of the time, but the site has tried to be accommodating to players who have registered to the site. The comments by players can be very harsh whether they are true and accurate or not. People who have a grievance are not always right when the facts are known. In the case of this site the prospective customer must read the Bingo Hall review for them self and make their own decision.

The fact that this site offers so many large jackpot games make this site one that many players will consider playing on. Playing on a site has a risk attached to it in that the site has control of funds that may or may not be available to be sent back to the player.